« a fantasy novel that perfectly captures the experience of being in a foreign country where you only sort-of speak the language and everything is strange. It made me think how astonishing it is that most people thrust into fantasy worlds cope so well and without any of this feeling of only half-getting what is going on and missing the significant subtext. Of course, (…) some of what’s going on is magic, but only some of it. A lot of it has to do with Amaz’s history and current affairs. Also, Amaz is much more genuinely strange than most fantasylands. (…) She makes Amaz work as authentically foreign, and she makes it work in its foreignness, she captures that experience so well, the culture itself is made up, the ways in which it is foreign are universal. I expect everyone has had the experience of being in a foreign country and finding the things that are the same as strange as the things that are utterly different, because of the different context, and of finding something that seems the same on the surface but which turns out not to be. Goldstein takes those universal moments and runs them through the novel.
For the people of Amaz, it’s business as usual. If your wife turns into a bird, that’s a pity; if you find a magic sword that’s nice. The very architecture and layout of the city are reflecting a struggle, and they take that for granted. One side uses jagged script and the other rounded script, and the struggle is reflected in the graffiti. Like a lot of things it’s clear to them even if it’s invisible to tourists. Goldstein invites the reader to consider both points of view, and the book is much richer for that. (…) » 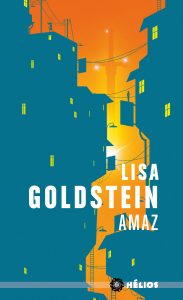